The sensationalist reporting of the Covid 19 Pandemic has bred a degree of anxiety, especially in older people, which has left many afraid to leave their homes. This is a symptom of our over-anxious society which, over the last century, has lurched from one anxiety-causing crisis to another.

“‘The whole aim of practical politics,’ wrote H.L. Mencken, ‘is to keep the populace alarmed (and hence clamorous to be led to safety) by menacing it with an endless series of hobgoblins, all of them imaginary.’ “Newspapers, politicians and pressure groups have been moving smoothly for decades from one forecast apocalypse to another (nuclear power, acid rain, the ozone layer, mad cow disease, nanotechnology, genetically modified crops, the millennium bug…) without waiting to be proved right or wrong.”

Traditionally, anxiety was caused by the fear of death so wars were a great contributor to anxiety. For those with strong Christian faith, there was the assurance that death was the entry to eternal life in Heaven. This is why the Bible described death as “sleep” and Jesus said of Lazarus’ death, Our friend Lazarus has fallen asleep; John 11:11. Such a belief removed the deep anxiety that came with the fear of death.

However, Darwin’s “Theory of Evolution” seriously undermined Christian faith and taught that man was the product of chance and only a higher product of the animal kingdom so he lived and died like an animal. Death was the end. The inevitable result was a deep fear of death and a rise in anxiety.

History in the last century has witnessed one crisis after another leading to increasing levels of fear and anxiety. The media has exacerbated this with sensational coverage of the bad news from all around the world.

World War 2  brought great anxiety when it appeared the whole world would be swallowed by enemy forces bent on destroying freedom. Families at home  waited in fear for the dreaded telegram which would tell of the death of a loved one in a battle overseas.

The end of the War brought a new era of anxiety on two fronts. The Cold War threat of Communism overrunning Europe and the Pacific and with this threat the terrible possibility of devastating nuclear warfare. As novelist Norman Maile, lamented: “For the first time in history we were forced to live with the suppressed knowledge that we all faced an anonymous radioactive death.”

Then the Cuban Crisis in 1962 brought us to the brink of a possibility – a terrible World War 3.

At the same time, we faced the threat of  Communism overrunning South East Asia and threatening Australia. This led to the Vietnam War where deep concern over casualties brought anxious demonstrators on to the streets in protest leading to deep social unrest.

Here in Australia, the availability of  Mao Zedong’s “Little Red Book” was a cause of anxiety to many parents. Communist-dominated Trade Unions brought unending industrial strife and social anxiety.

Acts of terrorism by left-wing radicals, including the hijacking of airliners and bombings, raised the level of anxiety in the 1970s.  By 1976 there were over 140 active terrorist groups operating in some 50 nations. At this time the tensions in Palestine between Arabs and Jews threatened world peace.

The Islamic Terrorist organization Al-Qaeda was founded in 1988 by Osama bin Laden, originally to support the Taliban in Afghanistan. It declared Holy War on the United States and, after a number of attacks, on September 11, 2001, it launched the attack with hijacked planes which destroyed the World Trade Centre in New York killing almost 3000 people.

The degree of anxiety this caused worldwide led to a coordinated attack on Islamic Terrorists and deep anxiety over Muslim minorities within Western Countries.

All these crises involved the fear of death and the resulting anxiety.

In the 21st century,  there has been growing anxiety over “Climate Change” fed by extreme organizations like “Extinction Rebellion” with its apocalyptic agenda that says we are facing the end of civilization as we know it due to increasing temperatures, rising sea levels, more common floods, cyclones and severe droughts.

The Covid 19 Pandemic triggered worldwide anxiety with 114 million reported cases resulting in over 2.54 million deaths.  This has resulted in a huge increase in people seeking mental health treatment. In Australia in January 2021, 41% of adults reported symptoms of anxiety and/or depressive disorder.

Even now that a vaccine is available, there are large numbers – perhaps 25% of the population – anxious about the effectiveness of the vaccines being offered.

Added to this are those, especially young people, deeply anxious about their future employment and economic security or whether their business can survive the economic downturn.

It seems we are destined to hunker in abject fear before our larger and larger television sets wondering “What next?” as we breathlessly await the next disastrous report in an unrelenting farrago of bad news.

Is it that the media has conditioned us to stay poised with our finger hovering over the panic button?  Or is it we have lost the foundation of faith that acts as an anchor in the storms of life?

Mark chapter 5 records how a Synagogue Ruler named  Jairus begged Jesus to come and heal his dying daughter. On the way, news came that the little girl had died.  Jesus turned to Jairus and said Don’t be afraid. Just believe. He was telling him not to be afraid of death. At the house Jesus told the mourners, The child is not dead but asleep. Sleep, of course, is no cause for fear or mourning. Jesus then went in and took the girl by her hand saying, Little girl, get up! And she stood up and walked.

This episode was teaching the disciples and the girl’s parents the important truth that death is not to be feared because it is not the end.

Evert true Christian knows that one day they will die but that is not the end. It will be like falling asleep and waking in the presence of the Lord where all pain, sorrow and grief will be gone forever. So, Jesus’ word to Jairus is for us: Don’t be afraid. Just believe.

The story of Jesus and the disciples in the storm on the Sea of Galilee is also significant.  (Matthew 8:23-27) Jesus was asleep in the boat with His disciples  crossing the Sea of Galilee. Suddenly hit by a furious storm,  these seasoned fishermen panicked. They woke up Jesus “Lord, save us! We’re going to drown!” Jesus responded, “You of little faith, why are you so afraid?”

He then rebuked the winds and waves, “Quiet! Be still!” (literally “Be muzzled!”)

If we think that impotent human beings are in control of the elements and that the future of the planet is in our hands, then we have every reason to be deeply anxious.

When Peter and John were released from prison after being threatened by the Jewish leaders, they prayed quoting Psalm 2: The kings of the earth rise up and the rulers band together against the Lord and against his anointed one.’ Indeed Herod and Pontius Pilate met together with the Gentiles and the people of Israel in this city to conspire against your holy servant Jesus, whom you anointed. But then they added these significant words, They did what your power and will had decided beforehand should happen. (Acts 4:26-28)

Panic and anxiety did not overcome them because they firmly believed that God was in total control so all they needed to do was to pray to Him. No wonder, Peter was able to later write in 1 Peter 5:7 Cast all your anxiety on Him because He cares for you.

We come to God in prayer because we have faith that He can meet our need. This faith is grounded in hope- the absolute certainty that the future is in God’s almighty hands.

This certain hope is described in Hebrews 13:14 as looking forward to an enduring city…that is to come. It is the hope of heaven which, for the Christian is absolutely certain because God has promised it and secured His Word by an oath (Hebrews 6:13-18) so that this hope as an anchor for the soul, firm and secure

When a society loses hope in the afterlife and falls victim to the false belief that all we have is this life so we die like the animals, then, what lies ahead in this life is utterly unknown and ultimately fearful – a sure recipe for anxiety!

In Deuteronomy 28:65 Moses warns the Children of Israel that, if they disobey His commands they will be scattered among the nations. Among those nations, you will find no repose, no resting place for the sole of your foot. There the Lord will give you an anxious mind, eyes weary with longing, and a despairing heart. That surely describes our situation!

The challenge for Christians is to remain calm in the storm. How do we do that? Psalm 139 reminds us there is nowhere we can go in this world where God is not found. Therefore, when facing trials, we must turn to the Lord and cry, Search me, God, and know my heart;    test me and know my anxious thoughts.  See if there is any offensive way in me, and lead me in the way everlasting.

When we know we are in the way everlasting,  we know we are held secure in the everlasting arms and there is no cause for anxiety.  Psalm 91:1-3 assures us; Whoever dwells in the shelter of the Most High will rest in the shadow of the Almighty. I will say of the Lord, “He is my refuge and my fortress, my God, in whom I trust.” Surely he will save you from the fowler’s snare and from the deadly pestilence. 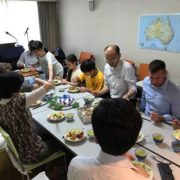